What if the Right memed a civil war and no one showed? Just a bunch of empty white sheets moaning about blood and soil. 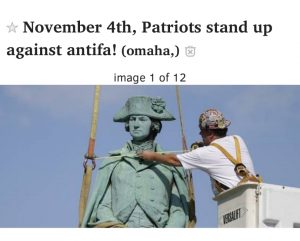 #RefuseFascism, which is the name of the November 4th protest march that is only slated in a handful of large cities, is meant to drive out the “Trump/Pence Regime” so says the advertising by the formerly Maoist organization founded in the 1970s, Revolutionary Communist Party, USA. The current form of RCP, or RevCom, is a staple of protests in NYC, if at times an unwelcome staple.

The group’s plans for Nov. 4, which have become shrouded in misinformation helpfully guided by right-wing media willfully misleading their readers into thinking a joke tweeted by a popular account was a real threat when it said “can’t wait for November 4th when millions of antifa supersoldiers will behead all white parents and small business owners in the town square.”

Of course the otherwise rational and level-headed consumers of racist and anti-Semitic conspiracy theories peddled by Breitbart, Alex Jones, and Fox News would notice an absurdist joke when they saw one, right? Right? Alt-right?

Wrong. Within hours @KrangTNelson, the comedy twitter account responsible was suspended in a mass-report campaign and was being called the “ANTIFA Leader” in Breitbart. In Newsweek the “Antifa Supersoldier” myth was examined and debunked. On Facebook, trigger-happy threats became more pronounced at the fear of an anti-fascist civil war that ballooned to even more comical proportions by sweeping in associations with ISIS and MS-13, and U.S. Military sleeper cells, and even the United Nations!

In Omaha, a self-identified Patriot on Craigslist put out the call to defend against the oxymoron of planned riots at Memorial Park intended to tear down statues or something. The post says they “reached out to biker groups (such as freedom riders, and bikers for Jesus christ), Republican groups, libertarian groups, veteran groups, etc. I have also let the sarpy and Douglas County sherrifs know” it also reminds anyone going not to cause violence. The call was picked up by a Stormfront poster and urged optics homogeneity. “I ask you not to bring swastika flags or dress in kkk clothing. let’s blend in with the other right wingers don’t do anything illegal.” If you have to constantly remind your supporters to not be violent, it suggests violence is the default of right-wing events and counter-protests. The last three major white nationalist events have concluded on violent terms.