James Ludacka is a Plains regional captain for National Socialist Movement. He prefers to go by Jim when he speaks to media. Ludacka lives in Scandia, Kansas approximately 20 miles south of the Nebraska-Kansas border, and about 2 hours south of Lincoln. One of his three brothers, Joel, unsuccessfully tried to rob a bank in their little hometown of Mead, which is about halfway between Omaha and Lincoln; approximately 30 minutes either direction. He was released in 2015 and lives in Wahoo. 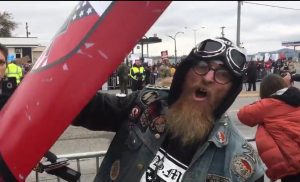 Jim has long been known to anti-fascists in Kansas and Missouri for being instrumental in organizing NSM rallies against non-white immigration in Topeka, KS in 2002, Omaha, NE in 2007, and Kansas City, MO in 2013. Ludacka claimed immigrants were stealing jobs. As of the 2010 census, Scandia has 350 people and is 98.9 percent white. Mead has 550 people and 98.1 percent white. Ludacka only sees poor white people in small towns, so of course he thinks someone that doesn’t look like him is at fault.

Many thanks to the Missouri anti-fascists, and also the tip from @don_chump of Restoring the Honor blog for getting his ID from photos taken in Shelbyville, TN during the “White Lives Matter” rally on October 28, 2016. Here he was spotted with a Huskers football patch on his battle vest at the police checkpoint. Counter protesters and media were not allowed anything that might be a weapon such as flagpoles and camera mono/tripods. The white nationalist groups had shields, helmets, and mic stands. 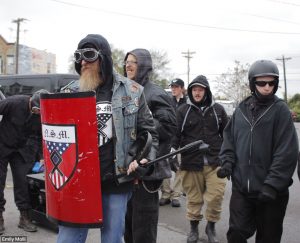 Also in attendance with the NSM were the League of the South, disrobed Klansmen, the Traditional Workers Party, and a handful of Vanguard America members. Here’s TWP’s Matt Heimbach giving an interview and there’s Ludacka on the right and directly center in the back is Daniel Kleve, the University of Nebraska-Lincoln biochemistry major and member of Vanguard America. 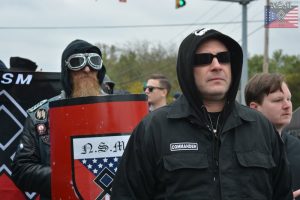 After the failed White Lives Matter rally, around 20 members of TWP and Vanguard America, including Heimbach and Kleve, started a fight with an interracial couple at bar in suburban Nashville. The following day, Kleve and four others harassed parishioners of the Burnette Chapel in Antioch, TN to prove “white people are under attack” after a Sudanese-born man shot six people and killed one at the church in a domestic assault case. The alt-right claim it was a “reverse Dylann Roof” situation. On Kleve’s short-lived low energy Vanguard podcast he refers to him as “Saint Dylann Roof” in the first episode.

Ludacka has the neo-Nazi version of Benjamin Button’s reverse aging.

Here is Ludacka in 2002 looking like he has one foot in the grave selling swastika armbands just before the rally on the Topeka statehouse steps. Maybe the beard just hides the look of death better. 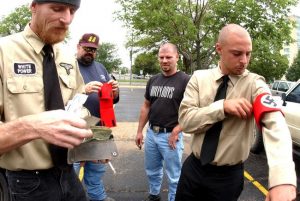 Ludacka on his way into the Topeka rally showing his “Dump Israel” sign. 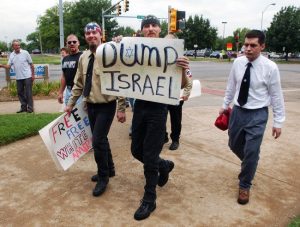 November 9 2013, Kansas City MO federal courthouse. The NSM and Klan held a Midwest convergence and Ludacka embarrassed his commander Jeff Schoep in what he later called the “unfriendly city” by pulling in fewer than 50 people, and were countered by 300-400 anti-racists. 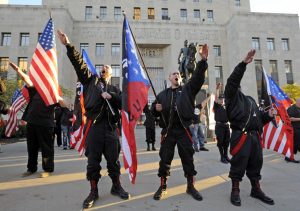 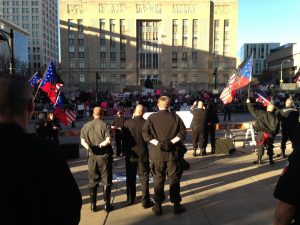