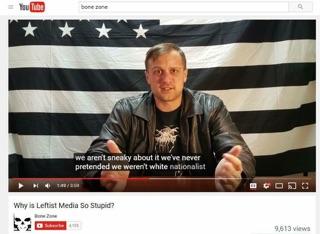 On December 16th, 2016, we submitted a report to It’s Going Down on the once rising alt-right media darling Cooper Ward. At the time of the report, Cooper was enrolled at University of Nebraska-Omaha, was a regular guest on the podcast The Daily Shoah, deputy director of American Vanguard (aka Reaction America, aka Vanguard America, aka Patriot Front), and the content creator for the Counter-Signal Memes for Fashy Goys page on Facebook.

We had an eye on Cooper for months before his grand coming out party. It was in the comments of his meme page where he posted an obscured selfie but forgot to blur the Nebraska license plate of his car parked in his mom’s driveway. He made appearances at pre-election anti-Trump rallies in the Omaha metro in failed attempts to “trigger timid shitlibs” by using genius brain skills gained from his partial philosophy degree. His bearded, lumbering appearance and stammering lines of questioning at these rallies didn’t go unnoticed, but wasn’t the masterful trolling he considered it to be. It wasn’t until Cooper unmasked himself on his Youtube channel feeling emboldened by the election of Trump, and freshly shaved with a bleached combover, that he began airing his sick owns on The Bone Zone. It was then we realized the podcasting memelord and the tall awkward guy at rallies we already knew by name were one in the same.

On November 8, the Vanguard Nebraska account tweeted a photo of a group holding the flag. When a community radio dj reposted it, she says many people contacted her to say they were tricked into holding it by two guys claiming in was in support of U.S. troops. The photo was taken sometime in the late summer of 2016 while Jesse “SeventhSonTRS” Dunstan visited Cooper in Omaha. The local tv news quoted the false claim of 100 Vanguard members in Nebraska in a Twitter interview with the person running the Vanguard Nebraska account, and calling himself Sam Hyde, the name of a comedian attached to the alt-right famous for being named as a suspect after mass shootings.

Less than two weeks after we exposed what he already laid bare, Cooper began denying the claims made against him in emails to IGD, later proposing a quid pro quo that if they deleted the post, he would identify other hosts of The Daily Shoah and recede from public life faster than his hairline.

On January 9th, the new semester at UNO began and students were met with a flurry of flyers alerting them of the threat Ward’s racist, genocidal ideology posed on campus. The same day he dropped all his classes and retreated back to his mom’s McMansion in West Omaha.

A full timeline of the month-long domino effect we caused in The Right Stuff podcasting empire is documented on the blog Angry White Men.

Below is the first statement originally posted to IGD, and the follow-up where Cooper Ward offered to snitch. If only more fascists believed in the noble creed of death before dishonor.

The response from the /pol/ chans lit up with fear, anger, and disgust that their heroes weren’t who they claimed to be, and had to find out from their ideological enemies. Natural to the environment of 4chan and 8chan, each dox let a thousand conspiracy theories bloom. Claims that Cooper used TRS and Vanguard America meet-ups as a way to groom underage boys for sex, to the idea that because Mike “Enoch” Peinovich was married to a Jewish woman and lived on the Upper East Side of New York City he couldn’t possibly be a “real” white nationalist, and must be a CIA ‘controlled opposition’ asset meant to cause rifts in their movement. Whether Peinovich actually separated with his wife isn’t much of anyone else’s concern, but it certainly made their professional lives harder. If Ward was really grooming children, we have not seen any reports of victims coming forward yet (and they might forever be silenced out of fear), but it was a serious enough concern for Vanguard America to set an 18 and over membership requirement shortly afterwards.

We have entered an era where the disgusting and vile approach of once-closeted fascists and racists has become an accepted norm on the American stage. The normalization has begun, with excuses by not only the right, but also the liberals who believe the hatred espoused by these “people” is “freedom of speech.” Are they so blind to not understand that the fascist calls from behind their podium of lies is a recruiting tool? Are they so blind to not understand that this hatred espoused by these Nazis rallies their forces, and influences other white nationalist individuals to partake in lone wolf direct action?

We believe in silencing the hate speech of these shadowy organizations as a defensive action for all marginalized people forced to hide in fear. We believe in direct action to defend all communities that may find themselves threatened.

As Antifascist Action-Nebraska, we have dedicated our work towards hunting down and exposing these Alt-Right Nazis.

We have chosen to expose the Deputy Leader of American Vanguard who is an Omaha resident. American Vanguard is a White Nationalist organization responsible for the poster/flyer campaigns at Purdue University, Florida Gulf Coast University, the University of Maryland as well as street corners across the country under their “Northern Propaganda Campaign”.

This is a war, they fired the first shots, now all people of conscience must join with us and fight the scourge of Nazism.

Ward operates out of his mom’s home in Omaha, Nebraska. Ward has been printing white nationalist posters and distributing them. We in Nebraska have begun to see these posters on our street corners, joining with a myriad of other cities and states who have been infected with American Vanguard propaganda.