Gary Lauck, aka Gerhard Lauck, aka the Farm Belt Führer, aka Grandpa Fascism, aka the Stuttering Anti-Semite, lives in Fairbury, NE. Some of our crew have encountered him at past NSM rallies, probably most recently in 2002 on the Topeka, Kansas statehouse steps, but it is likely there have been more recent brushes considering his Fairbury neighbors have a laissez-faire attitude to his existence, and he has toned down his image since reportedly getting mailbombed. He grew out the side of his Hitler mustache as he grew eldery.

On July 6, 2017, The Guardian ran an unprompted long-form piece fawning on Lauck’s rather mediocre history, yet large influence in neo-Nazi culture. He ceased being even locally newsworthy at the end of the 20th century, after returning to the U.S. following a four-year sentence in a Hamburg, Germany prison for violation of hate crime laws related to distribution of Nazi literature across Europe, and false identification papers in Denmark. He continues hosting Nazi propaganda websites in the U.S. to circumvent European laws, and still runs a mail order book store for out-of-print Nazi and books from a PO Box in Fairbury. That’s the extent of his 64 years. Sad!

In August, days after the 2017 Unite the Right rally in Charlottesville, VA, Brent Fox, an organizer of the Daily Stormer ‘book club’ announced he had contacted Lauck and set up two websites. By Thanksgiving, Daniel Kleve was posting on Facebook that he was having dinner with someone presumed to be Lauck, as that’s who he receives reading material from. At the beginning of December, Lauck and the Stormer group began promoting their websites and tying it to the “It’s Okay to be White” 4chan campaign. The websites are a new direction for Lauck, as they greatly tone down the neo-Nazi imagery and rhetorical white nationalist screeds, which fit well with the middling cowardice of the IOTBW approach. 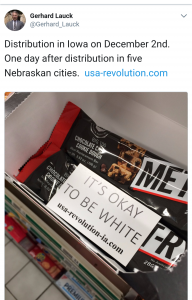