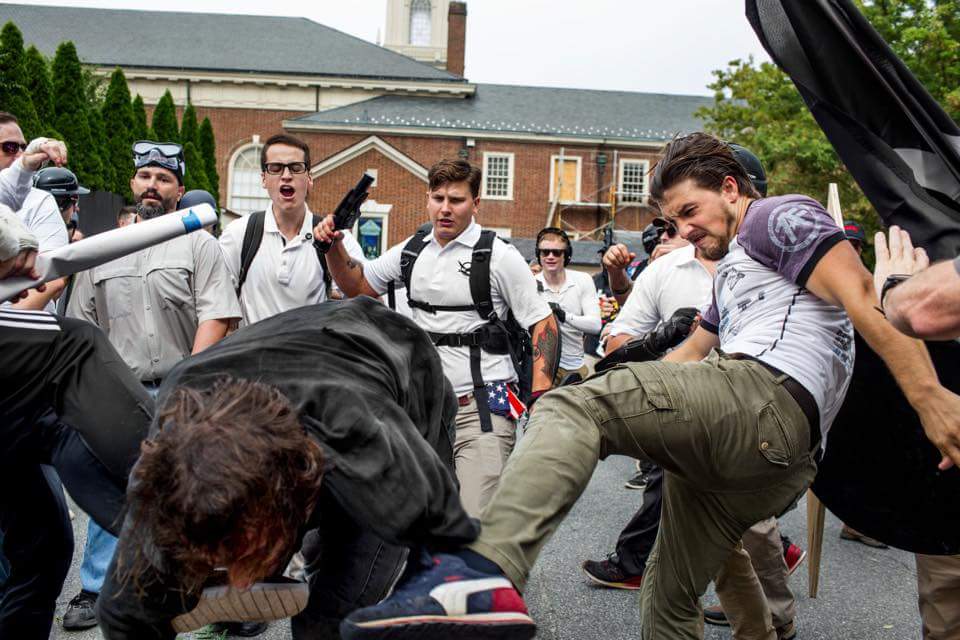 University of Nebraska-Lincoln are aware they have a campus neo-Nazi problem. This is not disputed. They are “aware of the situation” with Daniel Kleve, a 23 year old junior biology major, and have reaffirmed this awareness in email and phone calls many times since August 19, 2017, a week after Dan Kleve attended the deadly “Unite the Right” rally. UNL knew six days after he was photographed with other Vanguard America members attacking someone from a group of anti-racist clergy with his large metal flashlight on the streets of Charlottesville, Virginia. UNL knew there was an armed self-identifying neo-Nazi on campus planning revenge on students he suspected had alerted the administration.

In a Google Hangouts video chat hosted by Blake Lucca, Kleve tells the others “Trust me, I want to be violent. Trust me. Really violent. But now is not the time. So we need to build ourselves up. We need to be disciplined … so that when the time comes, we can, you know, do what needs to be done basically.” 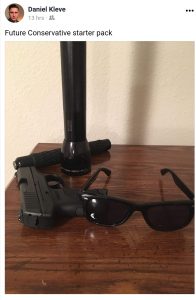 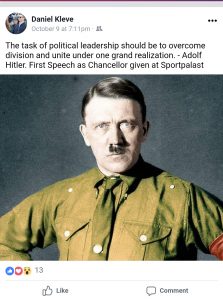 The UNL administration looked the other way and hoped everyone else would too. University of Nebraska is aware it is putting students and the city of Lincoln at risk by doing nothing to address a student organizing others for violence and advocating for racist genocide.

UNL has taken such a stance because they are afraid, but not of Daniel. They are afraid of the backlash they received from the governor and state legislators about the more palatable young conservative group Turning Point USA getting “harassed” by a grad student for tabling stale piss Reaganomics during a recruiting drive. The University fired the student-lecturer for expressing an opinion after a pressure campaign by TP USA; both the news director and chief communication and marketing officers resigned.

On September 12, one month after the Unite the Right, the Lincoln city council proposed a resolution against hate. Two people spoke against the resolution: Katie Mullen, the TP USA student that cost three people their jobs, and Dan Kleve “who identifies himself with the white nationalist movement.” Mullen said she fears police could “come to my door for standing up for freedom.”

UNL is outright protecting a violent self-identifying white nationalist because they’re scared of bad press backlash from some young republicans. 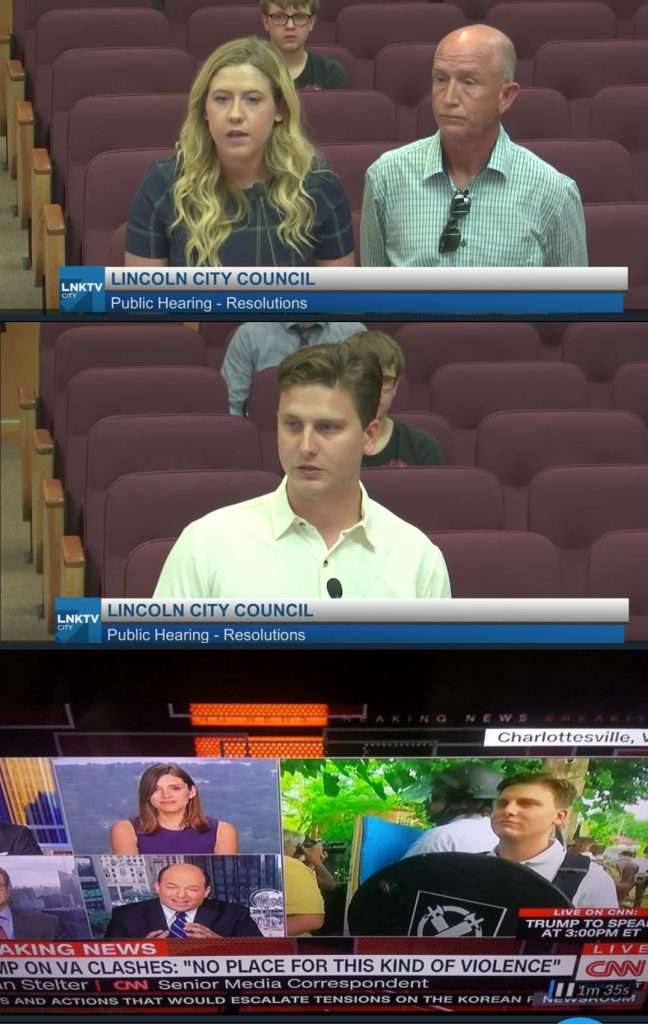 Dan Kleve posing in front of his neighbor’s window. His lapel pin is the algiz rune, or z-rune, representing Generation Z, which the alt-right not-so-euphemistically calls Generation Zyklon after the cyanide fumigant gas used in Nazi death camps. 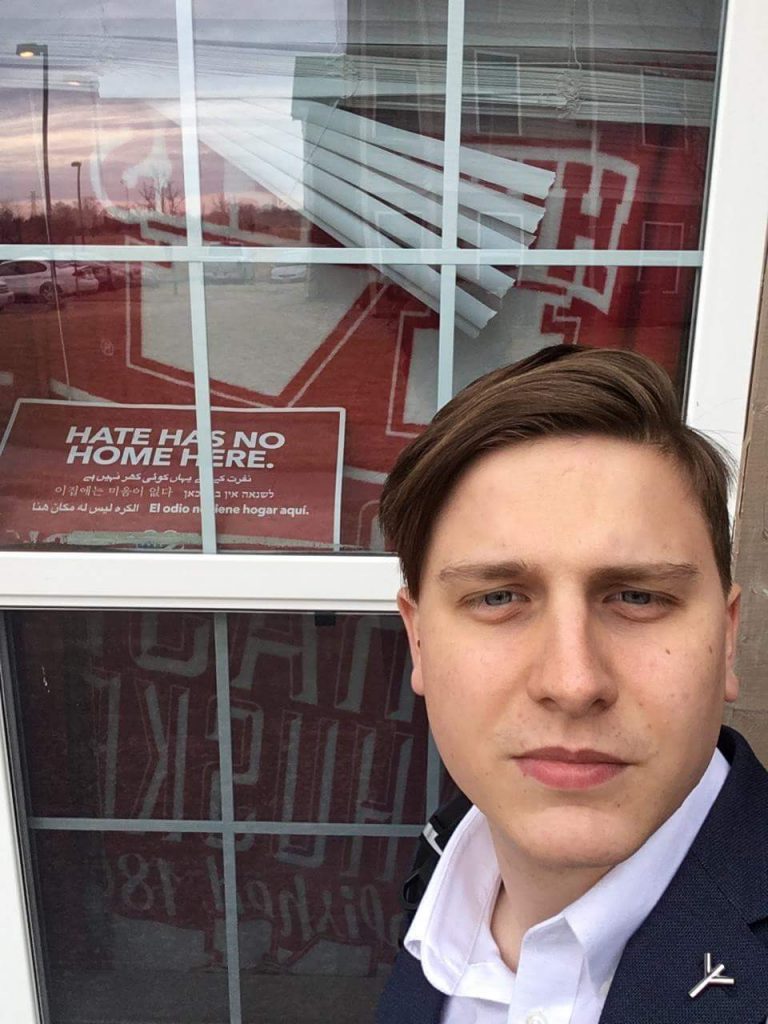 Daniel met David Duke, the former Louisiana state representative and Grand Wizard of the Ku Klux Klan in Charlottesville during the Unite the Right. 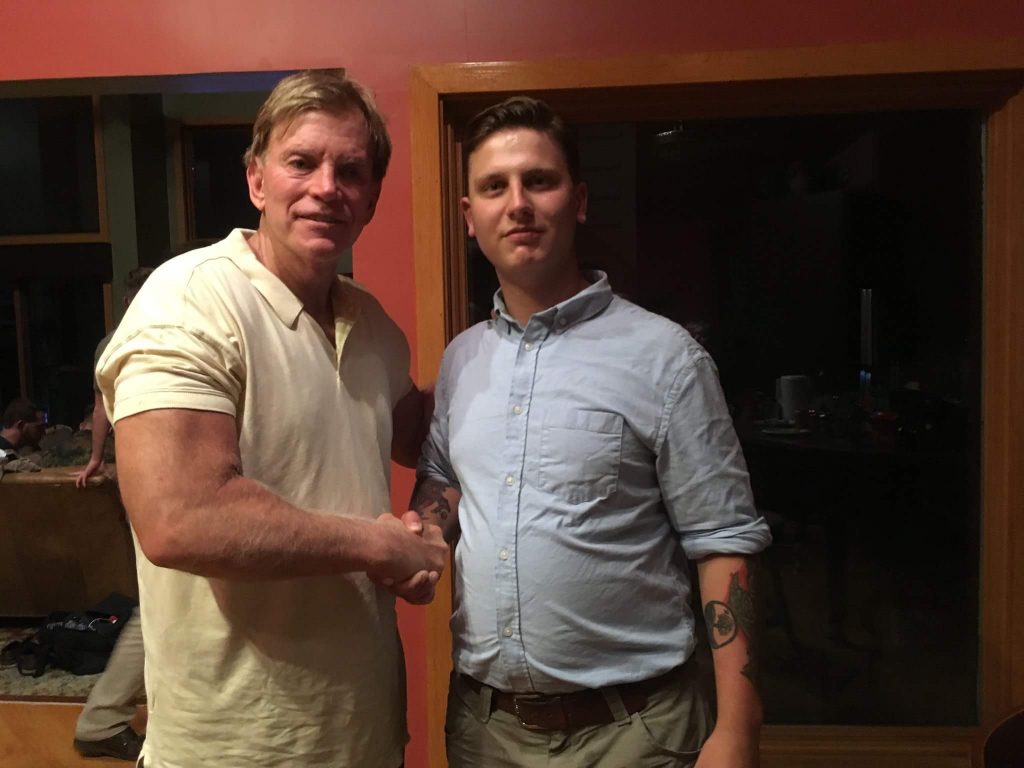 Richard Spencer was punched on January 20, 2017 because he was on a street corner surrounded by fawning mainstream media during a major event. It was a punch of opportunity, but it wasn’t the first or only attack. In fact, the moments before the punch heard ’round the world, Spencer explained some of the other tactics used against him: “We expect protesters with their Silly String or something like that, but we’ve entered this new world.” Likewise, strategic attacks against neo-fascist infrastructure are often overlooked or unseen for their lack of sensationalism. When a neo-Nazi is punched, it gives them the veil of victimhood and with it comes pity money and another platform. However, if the ground work is set and the fundraising and media platforms have already removed them or are otherwise restrictive to those spreading hate, the self-imposed victimization only projects their base weakness. When you punch a Nazi, the whole world punches with you. 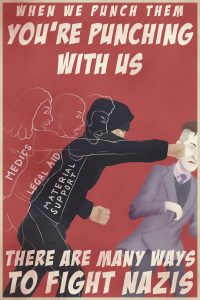 “Power is now in infrastructure” as Invisible Committee put it in To Our Friends. It is not as easy to overthrow infrastructure like it is kings and dictators. Infrastructure doesn’t drink poison or fall from bullets. It is, however, easier to blockade chokepoints of capitalist infrastructure. Applying anti-capitalist tactics used against resource extraction infrastructure to also hem up and deplatform fascist activity and funding is another prong in anti-fascist work. Pressure campaigns have seen success in pushing the tech sector to act in refusing to provide platforms for hate.

Daniel Kleve’s deplatformed list is a long one. Beginning with an exit poll interview he gave to Norfolk’s Nebraska News Channel that he claims got him fired from a job at Coca-Cola, ironic given Coke’s favorable proximity to the Third Reich. Whether it was his poor work ethic or opinions that got him fired, it was only the first. The gaming chat platform Discord, which Unicorn Riot claimed “most, or all, of the organizations involved in Unite the Right actively use Discord in their everyday work, the platform has been described as having a monopoly on the internal communications of the modern white supremacist movement.” Kleve’s previous chat servers and handle on Discord were deleted after it was leaked he wanted to “go Turner Diaries” on fellow students. (A reference to the 1978 novel about militant white separatists starting a race war, authored by Holocaust denier William Pierce.)

Kleve lost his Twitter account @racialtheocracy after the recognition ADL gave to the Facebook hate group he operated under the same name. Kleve was removed from IndieGoGo for raising a little money to attend the Unite the Right, and was twice removed from Paypal. The alt-right parallel to GoFundMe called “GoyFundMe” lost their webhost for promotion of hate groups, and with it Kleve and many others lost their donations that was potentially just a front for a Spanish shipping container company the whole time?
Kleve has three Facebook accounts because at least one is always in a 30-day suspension. Soundcloud removed his low-energy attempt at a Vanguard America podcast, and the bad optics played a part in Vanguard severing ties not only with him, but those he recruited and vouched for as well. His application to Identity Evropa was rejected, but not before they got some free labor out of him, which shouldn’t have been a surprise after he mockingly counter-signaled the group with an embarrassingly small flash mob at a church in Antioch, Tennessee during the weekend of cringe “White Lives Matter” protests that were outnumbered and shut down by local anti-racists in two neighboring towns. 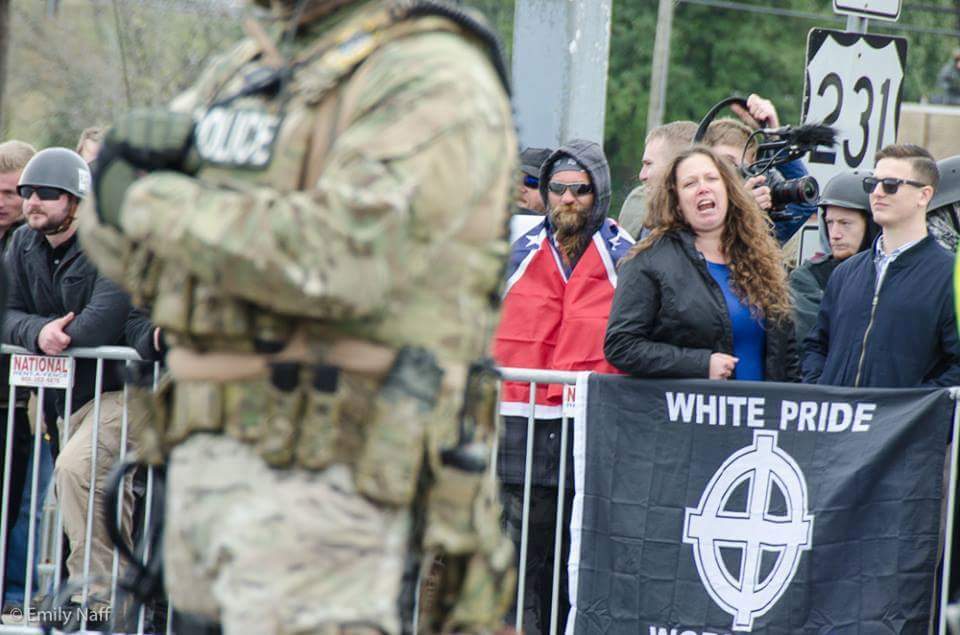 Evident here are the chokepoints of tech infrastructure even for a relative nobody attempting to climb the white nationalist social stratum, but not all points of conflict are blockaded with the same effort.

For example, Kleve’s university is painfully aware of the violent acts he committed in Charlottesville, Va, the racist violence his group initiated in Brentwood, Tn, and the threats he’s made to students, but administration has looked the other way at every step. Punching him does not expel him from university because the public relations department would rather coddle violent fascists than be shunned for taking proactive steps in securing the safety of their students and a future for their funding.