Brent Fox, an Omaha, Nebraska “book club” recruiter for the neo-Nazi forum Daily Stormer. Brent is active in the Millard & West Omaha area, but recruits online for the Greater Omaha and Council Bluffs area, and attempts to expand his little circle of fascists by hosting members of the Des Moines, Iowa Stormer book club.

(screenshot of the Daily Stormer with the Algerian domain suffix, active as of 8/29/2017, where the forum landed after all major domain hosting companies refused service to the website owner Andrew Anglin, following the deadly end of the Unite the Right rally organized in part by Anglin.)

Brent Fox is known on Daily Stormer as Fashy_fox, on twitter as @Lycalopex, on the road as Nebraska plate TPN 540, and he posted his professional email civilianfox@yahoo in the Omaha book club. The same email Brent uses on his resume, which he also helpfully posted online, however it is not up-to-date as of this posting. Brent is fluent in Russian and is a former Network Administrator II for the US Air Force Department of Defense. Civilian IT contractors that can’t figure out how Google works are running the backend of your defense systems, America.

(screenshot from the briefly held PunishedStormer during the interim of all major domain hosting companies refusing service to the website owner Andrew Anglin.)

On the The Right Stuff he is lycalopex, but has let it sit dormant, because like many white nationalists of the post-Trump election era that want to take their online hate to irl, TRS doesn’t present as deep of a well considering it is less centered on small cell organizing and more centered on non-stop fundraising via podcasts.

On Daily Stormer, Brent appears to have also claimed a leadership role in the Alt-Right card distribution the Omaha Stormer Book Club took part in at the 2017 College World Series where a Black man had his car window broken and a card left behind in the window seal. Brent gives a “friendly reminder that we do not break laws” and suggests the man broke his own window, but does not however deny leaving the Alt-Right card. This is the same incident where Omaha Stormer Book Club member Matt “Oktoberfaust” Johnson was found to have made a similar claim in a Youtube comment on the 3 News Now video segment. Matt was subsequently kicked out of his band and fired from his job in the same week he was exposed to have traveled to the “race realist” American Renaissance conference as a member of the criminal group of white nationalists known as Identity Evropa.

(screenshot from the briefly held PunishedStormer during the interim of all major domain hosting companies refusing service to the website owner Andrew Anglin.)

Brent Fox, back left, and his Daily Stormer Book Club hate group, photographed the Thursday before smashing windows at CWS.

Here, Brent Fox says “I admire what you did” to ‘Ghoul’ just days after news that Ghoul is exposed as Cooper Ward, then-Deputy Director of Vanguard America, the same white nationalist group James Alex Fields belonged to on the day he drove his car into the back of anti-racist and anti-fascist marchers in Charlottesville, Virginia injuring dozens and killing Heather Heyer on August 12, 2017.

new pic is of the feel when talking to a young beautiful Russian-speaking girl of 22 that wants kids and be a homemaker but is Muslim. 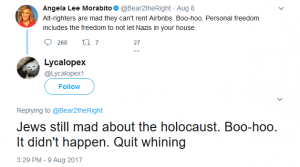 Curious about all the action in Charlottesville tonight. Wonder if Omaha would have a right wing protest like this in the future 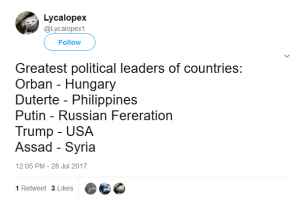