Back left; clockwise: Brent Fox with his hand on his hip, Kale Muffley in the Metallica shirt. Kale’s brother Kevin Muffley in the Jagermeister shirt trying to seig heil. There’s Holland Ludwick in the ‘Good Night Left Side’ shirt in the back with Pinochet all over his face. You’ll notice Bryan Curtis in the OOSH Helicopter Rides shirt, Matt Johnson in the red CIS SCUM shirt, Holland’s brother Dylan Ludwick with his hands on his knees, wearing his favorite Every Time I Die shirt.

These are just a few of the active fascists in the Omaha metro. There are more, such as the infamous Gerhard Lauck in Fairbury; the 50 year old lecher, William G Rempel of Hastings, NE; Daniel Kleve, a junior at University of Nebraska-Lincoln; Nathan Patterson at University of Nebraska-Omaha; Cooper Ward of Omaha; and more yet to be named. Do your part to keep fascism from spreading like a cancer. 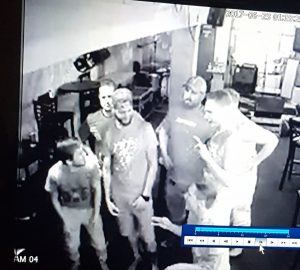