UPDATE August 13 2018: NFOA relocates their annual meeting after learning of David Pringle, the neo-Nazi gunsmith at DE Guns in Lincoln. 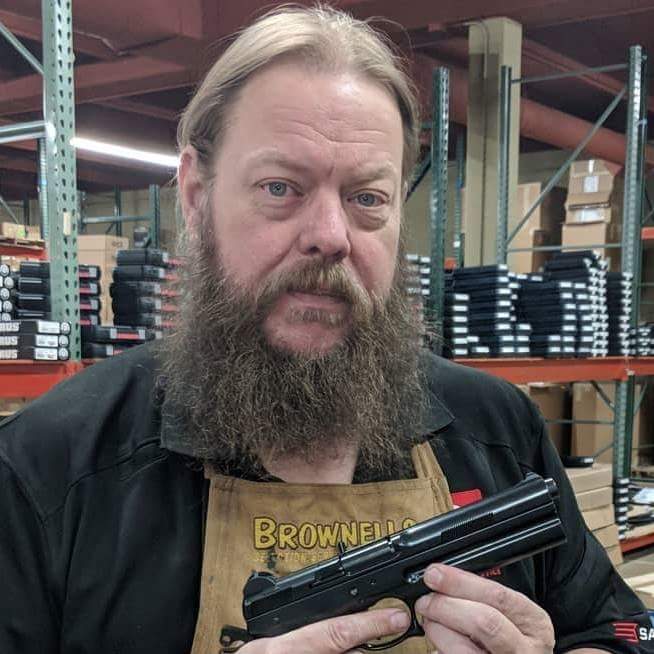 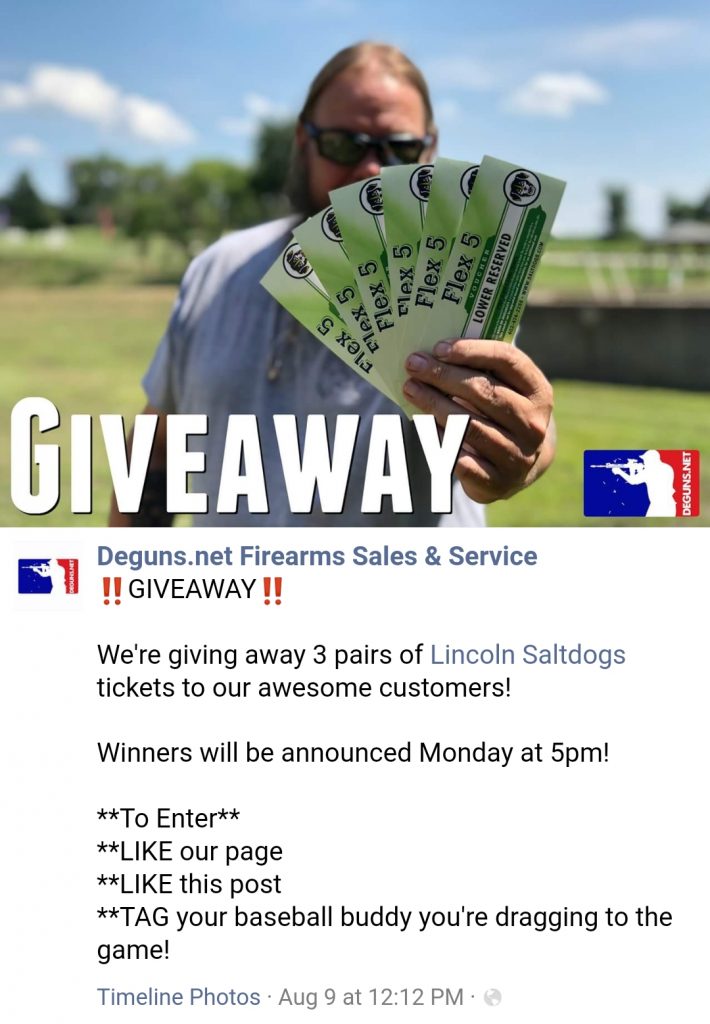 David is also a long-time member and Chief of Staff for National Alliance, a neo-Nazi organization started in 1974 and linked to robberies, murders, and bombings, including the Oklahoma City bombing by Timothy McVeigh. In 2003 the SPLC listed David at 24 out of 40 leaders to watch on the extreme right, saying, “Although Pringle’s father holds a Stanford Ph.D. and reportedly worked in weapons research for the Department of Defense, Pringle never went to college and instead joined the Army in 1988, at the age of 19. He says his visceral hatred of Jews developed when, on a mission in the Middle East, his unit brought a severely burned Bedouin boy to an Israeli hospital that refused to treat him.”

In 2002, at the age of 33 David Pringle led the Alaska chapter of the largest neo-Nazi organization of the late 20th and early 21st centuries. But first, what is the National Alliance?

National Alliance formed in 1974 by William Luther Pierce. Pierce had a doctorate in physics and in 1966 he quit a senior research position to work full-time as a publisher in George Lincoln Rockwell’s American Nazi Party until Rockwell was killed by a party member in 1967. Pierce then joined the Youth for Wallace group for segregationist George Wallace’s 1968 presidential campaign. After Wallace lost, the youth campaign continued for four years under the name National Youth Alliance with Pierce taking control and asserting a neo-Nazi platform, renaming the group National Alliance in 1974.

The Turner Diaries, written under a pseudonym and self-published in 1978 by Pierce’s National Alliance, has fueled some of the last three decades’ most infamous outbreaks of extremist violence, including Timothy McVeigh’s bombing of the Murrah Federal Building in Oklahoma City.

The book’s protagonist Earl Turner carries out orders for the Organization, an underground group struggling against the System, described as “an anti-white, anti-gun U.S. government that continually puts more restrictions on its citizens.” In the violent work of fiction, Turner and his militias kill Jewish shop owners and a Washington Post reporter before Turner flies a small plane with explosives into the Pentagon.

The Pacific Northwest Coordinator of National Alliance, Bob Mathews organized a real-life group called The Order, based on Pierce’s fictional one, in which they committed a series of actual armored truck robberies to help fund land purchases for National Alliance, and in 1984 two members of Mathews’ Order assassinated the Jewish attorney and radio talk show host Alan Berg in his Denver, Colorado driveway.

The book received larger attention in 1995, when pages were found in McVeigh’s car after his bombing that killed 168 people in Oklahoma City. McVeigh sold copies of Pierce’s book at gun shows across the country before detonating his truck bomb.

Pierce was savvy enough to not publicly revel in the news that his white separatist genocidal propaganda did exactly what he intended it to do, although he did sign his real name to the novel in later print and audio editions. Book sales went up, donations went up and he began using the money and notoriety to grow National Alliance into the largest neo-Nazi organization in North America with a conservative estimate of 1500 members in the U.S. and Canada making it larger in size and scope than his mentor’s American Nazi Party.

In the wake of William Pierce’s unexpected death in 2002, there was a contentious shakeup in leadership.

David Pringle, then a state chapter leader, was chosen to replace the national Membership Coordinator by the newly elected chairman Erich Gliebe, placing Pringle as his second-in-command.

Gliebe ran the Alliance’s record label, which in the late 1990s heyday of hate-rock was the most profitable of their ventures. One of the record label’s national socialist black metal musicians, Hendrik Möbus lived at the NA compound until he was arrested on an international warrant for murder in Germany. Pringle was the Alliance’s mouthpiece. In the Bulletin newsletters and press statements he called his predecessor, Billy Roper, brash and stupid. After the sudden firing, Roper subsequently pulled hundreds of members from National Alliance and started his own Arkansas neo-Nazi group. Roper, a former teacher was sought out and hired by Pierce and was part of what they considered to be an intellectual inner circle.

Gliebe and Pringle toured the country meeting with NA chapters to introduce themselves, provide training, and explain their vision of how to continue growing the Alliance.

Their plans saw quick backlash though as Gliebe was derided as un-Christian for dating a former Playboy model, and Pringle spoke plainly about his hate and didn’t couch it in palatable, neutral terms the press would print sympathetically.

Pringle said in a mass internal email that he believed Timothy McVeigh “should have a monument erected in his honor.” He went on: “I don’t feel any sympathy for the families of the 168, not the children, not the secretaries and definitely not the federal pigs.” The backlash wasn’t that other members disagreed with the sentiment to memorialize McVeigh, it was that by saying it in an official capacity would attract federal scrutiny.

David Pringle resigned in protest after two years as the Membership Coordinator in August of 2004 due to a complaint about mismanagement of business funds by the Chairman and Chief Operating Officer. In April 2005, an attempted coup against Gliebe caused the firing of Kevin Strom, the editor of the NA’s magazine and host of its radio show. Strom, Pringle and many other dissenting members formed National Vanguard, which continued selling neo-Nazi and “race science” books and magazines, including Pierce’s The Turner Diaries. For nearly a decade, the NA and NV were locked in civil litigations until 2014 when Erich Gliebe resigned and handed control over to Will Williams. This allowed for the reunification of the two group’s businesses and properties. The book store, record label, and Pringle’s gun manufacturing shop could all be reunited on the same 346-acre plot on top of a mountain in West Virginia.

Pringle made many visits to the compound during the Alliance/Vanguard split. He kept a foot in each camp as a kind of cypher. He entertained camp with songs in 2010.  He hosted David Duke, former Grand Wizard of the KKK in 2016. 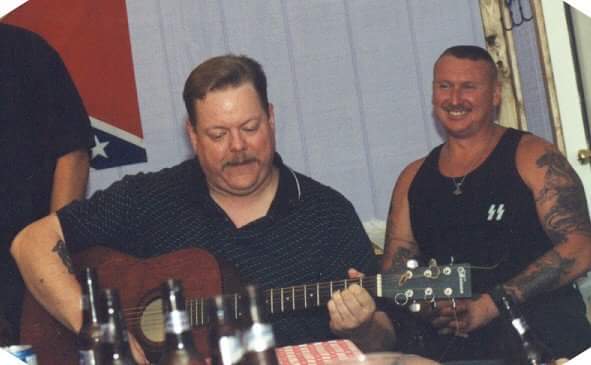 Pringle on guitar with federal ex-convict Chester Doles in the SS tank top.

In 2016, Pringle took on the Chief of Staff role, which included moving to the Mill Point, WV compound to secure the land and evict the small group claiming ownership.

“Chairman Williams asked me come here and secure the place. So I resigned from my very good job, working for people that I genuinely like and respect professionally and personally, to stop the trespassing and begin to repair the buildings, infrastructure, and get it ready for staff to return as we need them. And that is what I am doing.”

As Chief of Staff, Pringle maintained the land, worked with West Virginia state police to evict the holdover Gliebe-era residents, fulfill orders from book and music sales, host events, and build a gunsmithing shop Pringle named Disciple Machine and Precision. Pringle being a “Disciple” of Pierce’s tax-dodge attempt at a religion called Cosmotheology. The IRS denied the religious claim, and taxes for 346 acres are not likely cheap. 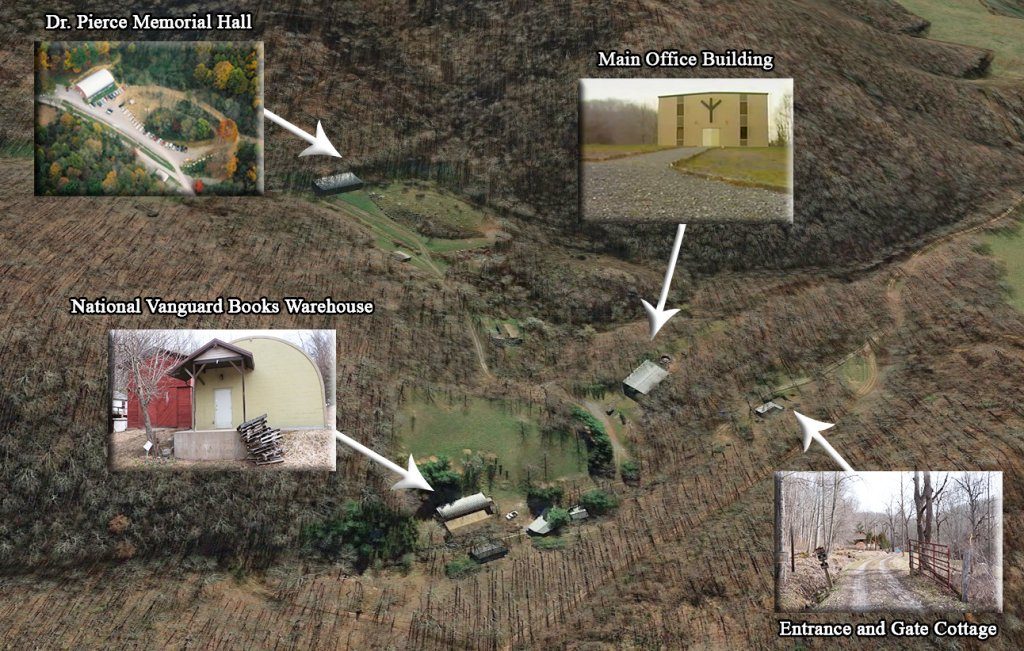 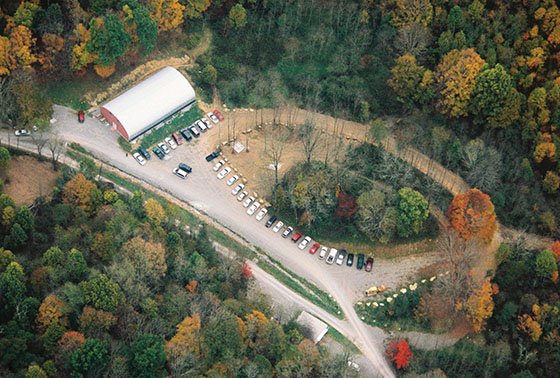 With fewer dues paying members and an inability to keep current in hate music, the once profitable media empire turned to crowdfunding on Hatreon, the Patreon alternative for racists. Pringle was begging for cash to “rebuild National Alliance” to his 98 followers on Twitter in November 2017

Ironic, when he tweeted this two weeks after the Unite the Right 2017. “If you belong to a political movement with no hammer … Better get used to being nailed. Over and over and over.” 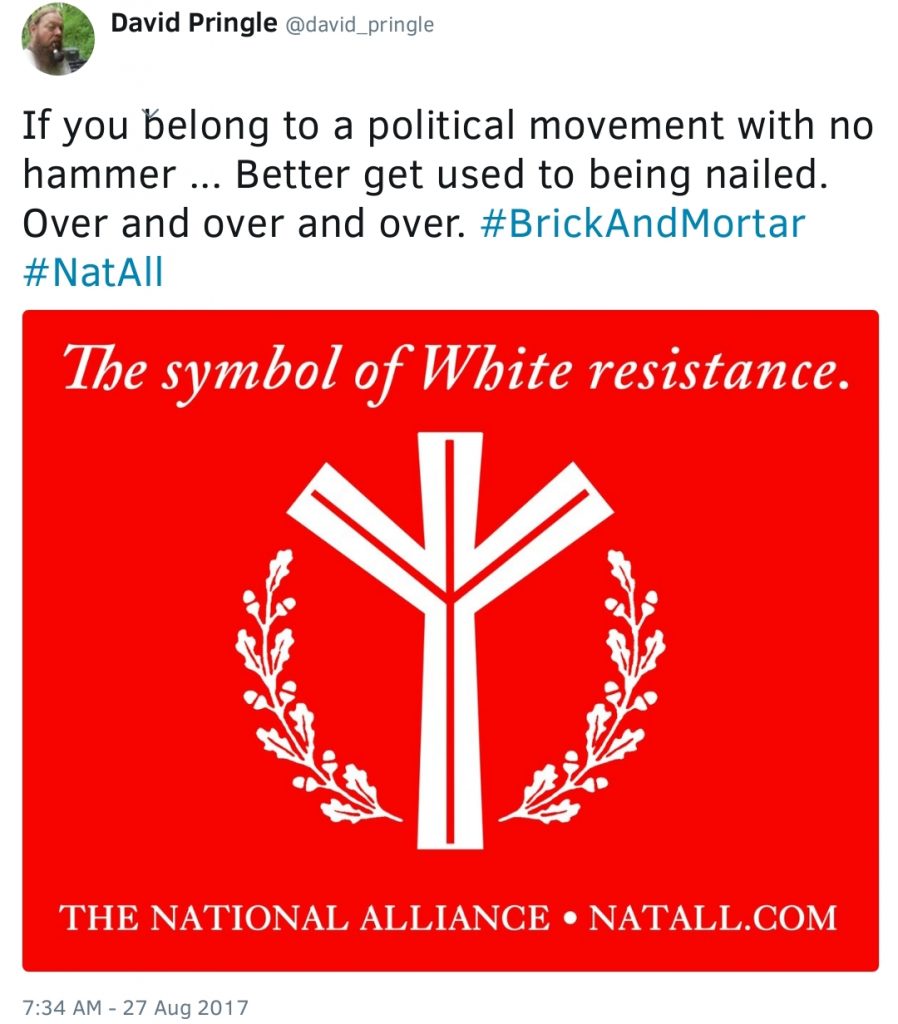 Pringle planned to attend the deadly Unite the Right rally on August 12, 2017 in Charlottesville, Virginia, but had broken his leg at the start of August. Which will fall apart faster, a rapidly aging neo-Nazi or his organization? 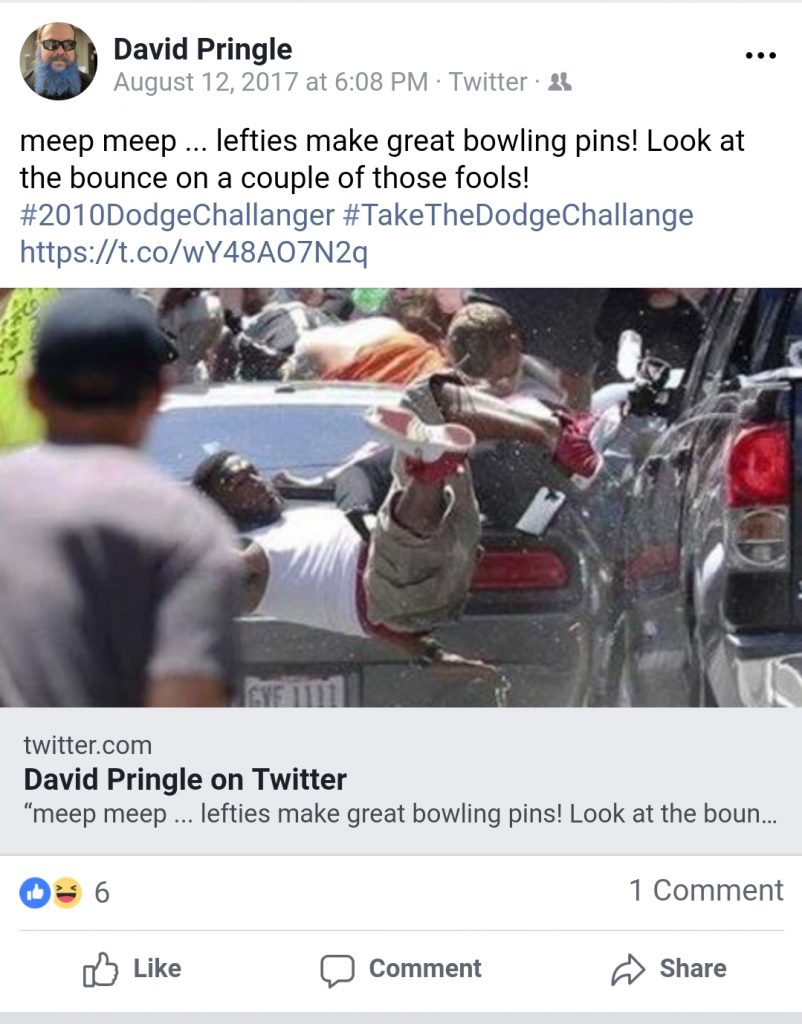 Pringle also has ties the Bundy Ranch and Arizona border militias. He attended a memorial service for one of the 2016 Malheur Wildlife Refuge occupiers Robert “LaVoy” Finicum held at Cliven Bundy Ranch. Finicum was shot while evading arrest after escaping an armed standoff with federal authorities. Reports say he attempted to draw his gun after yelling for cops to shoot him.

In 2014, Pringle was living in Yuma, Arizona and had ingratiated himself in militia border patrols that slash water bottles and act as heavily armed hall monitors. 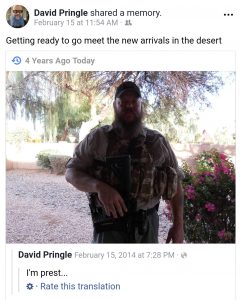 Long-time federal informant, National Alliance New Jersey member and internet radio show host Hal Turner was purged from the group for calling on Gliebe to step down in 2005. In a 2009 trial where Turner was a witness, it was revealed that Turner had been an FBI informant for many years. Turner’s lawyer said, “I don’t think he was a racist. He was doing a lot of those things at the behest of the FBI.” 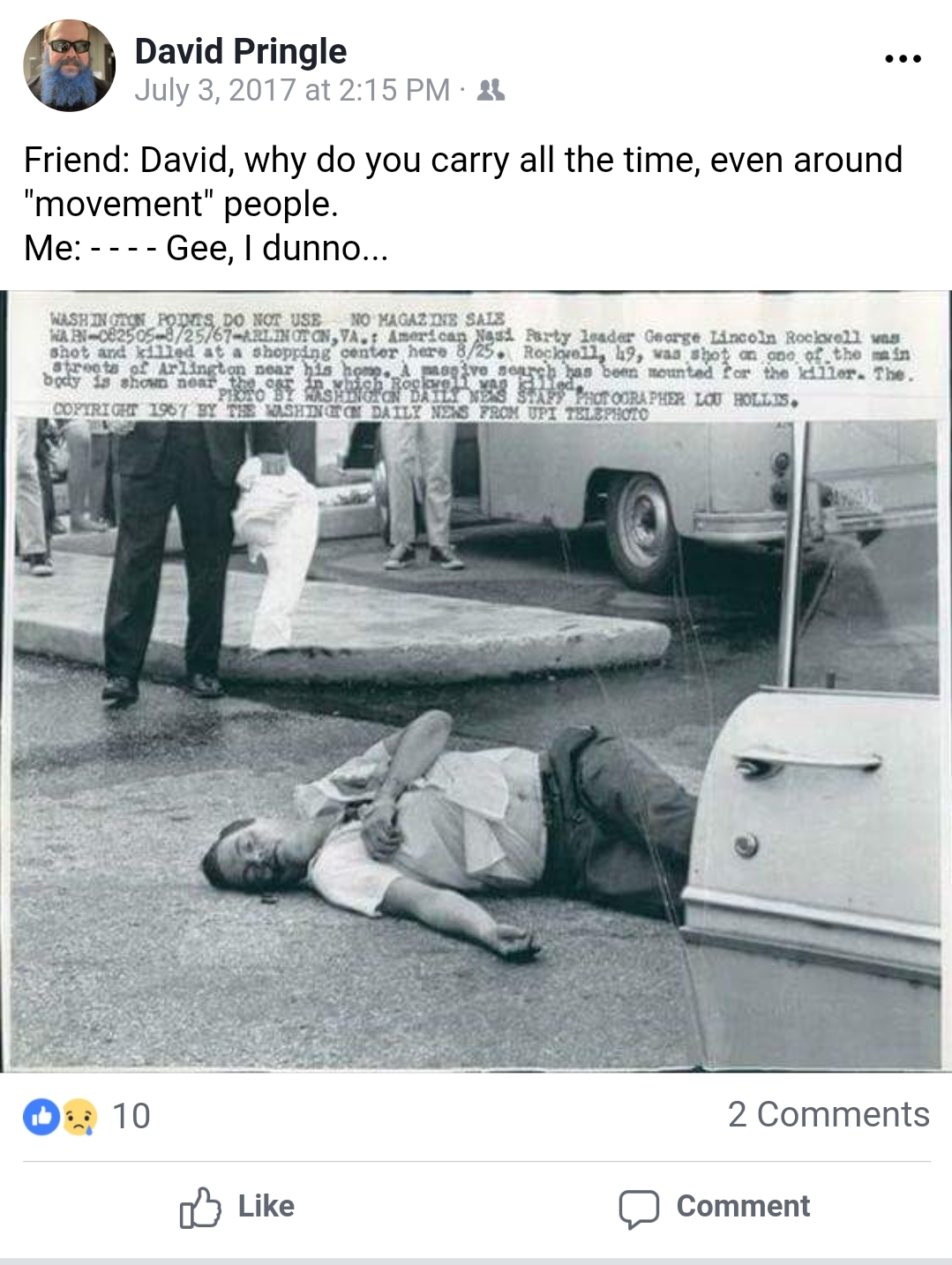