Bennett Bressman posted online as “bress222” in the leaked private chats for fans of the white nationalist YouTube show America First hosted by Nicholas J Fuentes. Bressman expressed extremely racist, antisemitic, homophobic, and violent sentiments throughout his more than 3000 comments, some of which is posted below. Bressman also dropped enough clues to his identity and employer, including photographic evidence, for Antifascist Action Nebraska to positively confirm his identity. His comments can be read, verified, and searched in full on Unicorn Riot  discordleaks.unicornriot.ninja

Governor Pete Ricketts and Kenny Zoeller, executive director of the Nebraska Republican Party, need to take swift and decisive action in the face of this hate so prevalent in leadership roles. Hate doesn’t exist in isolation and Bressman isn’t an outlier. This hateful behavior is encouraged and rewarded through systematic white supremacist ideology. The only acceptable course of action is for Governor Ricketts to fire everyone on his staff, repatriate this land to the indigenous people it was stolen from, then resign in disgrace.

Ricketts claims Bressman left his staff in December 2018 and is no longer in contact with the office, but Lincoln Star-Journal noted he was at a March 1 2019 Lincoln-Reagan luncheon as an anti-marijuana lobbyist. Bressman told LSJ he posted on his own time out of the office. His own words contradict him. 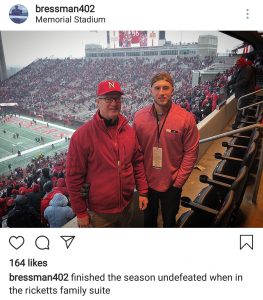 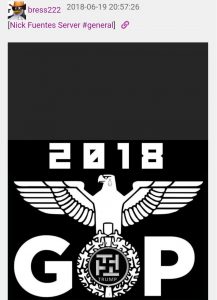 Messages shared on the gaming chat platform Discord were obtained by independent media collective Unicorn Riot in their ongoing investigations of the far right. The leaked chats, available in full on the Discord Leaks platform, provide an intensive look at the behind-the-scenes workings of Identity Evropa, perhaps the most active fascist group in the United States.

Nicholas Fuentes was recently invited (then disinvited) to speak at Iowa State University by Turning Point USA and the school’s College Republicans. According to the Des Moines Register, Fuentes still appeared on campus but students opposing him successfully cut his unwelcomed visit short.

Bennett Bressman was one of the most active members of the ‘Nick Fuentes Server’ until it was deleted by Discord shortly after the ISU visit for “incitement to violence,” according to a tweet by Fuentes.

“bress22” posted a photo at a ‘Need to Impeach’ campaign tour stop hosted by billionaire Democrat donor Tom Steyer. The tour schedule placed him in Omaha on June 21, 2018. The next day “bress22” posted two photos and said “the news captured me at the impeach blumpf event.” He helpfully circled and pointed a large red arrow at himself. The Omaha Fox 42 news footage of the event matched the photos he posted in the chat server. 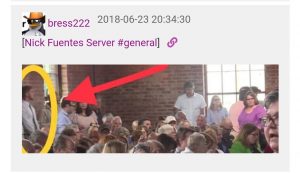 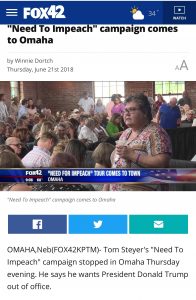 A simple search of “Ricketts State Field Director” directs to Bennett Bressman’s LinkedIn profile and news articles citing him as the State Field Director for Ricketts. He also posted the same selfie to Nick Fuentes Server and his Instagram bressman402. 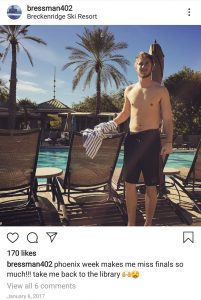 Bressman posted a screenshot of a text from his boss, Kenny Zoeller, asking him to delete a tweet critical of Israel. Like his Republican contemporaries, most of Bressman’s attention is occupied by Israel and the conflation that it represents all Jews, so we will highlight his thoughts there first.

Bressman’s comments are organized here by topic. We have sectioned his thoughts on Jews, the Holocaust, on political and personal violence against black activists, LGBT parades and journalists. Following this, his thoughts on race and immigration, and finally his ideas on current policies and the future political gains of fascism. 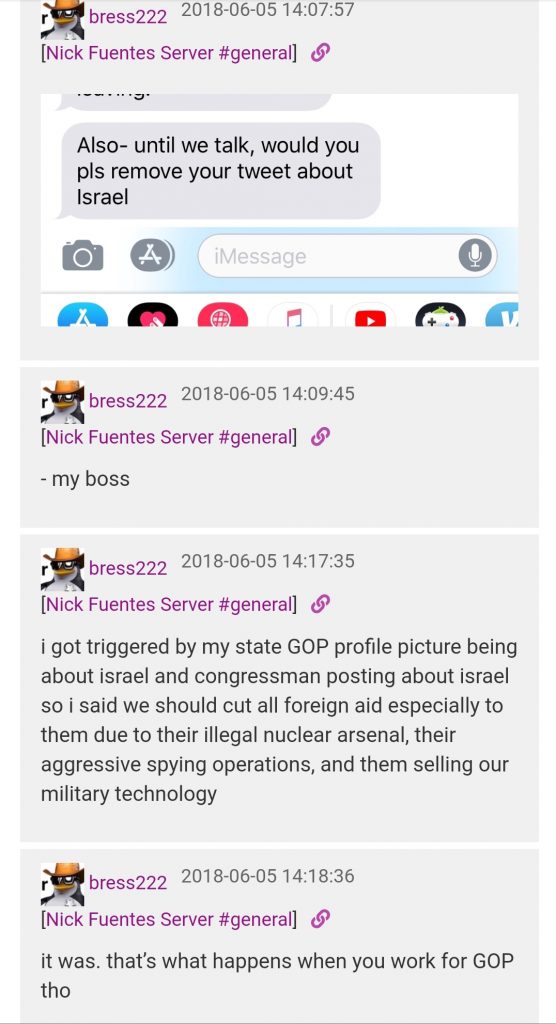 The (((echos))) reference is an antisemitic meme started by white nationalist UNO student Cooper Ward on The Daily Shoah podcast as an audio effect to emphasize a Jewish name. In text it is shown with triple parentheses. Bressman used this meme to describe Ari Kohen, his American Revolution professor at UNL.

Two other antisemitic tropes we’ve covered before, the first called “the Merchant” which is an illustration of a nefarious Jewish man rubbing his hands together. The other is a conspiracy theory about Jewish influence, such as global control of banking and Hollywood, or the promotion of vices like alcoholism. Bressman is using the antisemitic conspiracy language of “naming the Jew” in which this influence must be explicitly pointed out to non-Jewish people. Bressman names Hollywood “the visual Jew” and alcohol “the liquid Jew” in the following comments. 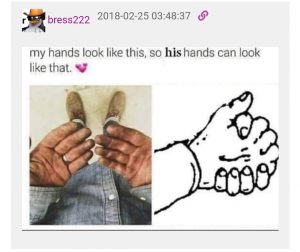 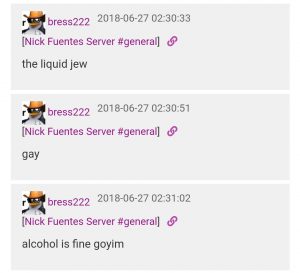 Bressman watched a 2005 YouTube “documentary” based on a debunked text from 1903 that claimed to outline the plan for Jewish domination. Neo-Nazis have used this text to both justify and deny the Holocaust, and prove all antisemitic attacks are self-defense. The Pittsburgh Tree of Life synagogue shooter believes he was acting in defense. 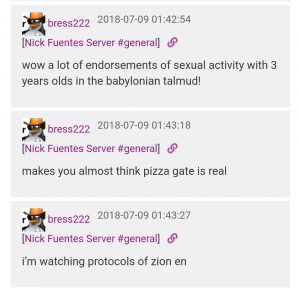 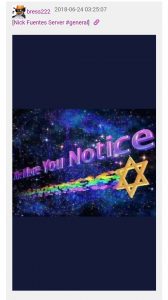 Bressman on the Holocaust 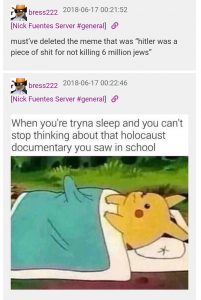 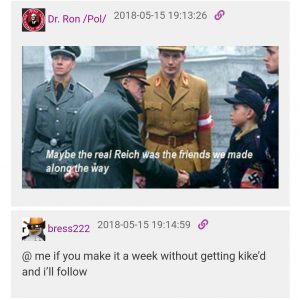 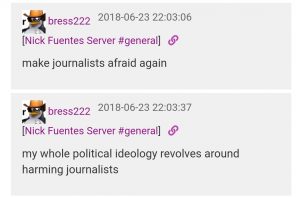 Bressman admits he would purposefully and maliciously drive into a Black Lives Matter protest in his white 2009 Daytona Charger with black trim. 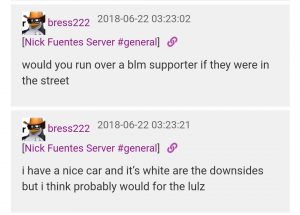 Bressman confesses to committing a hate crime at an LGBT rally for which he was never held responsible, and says he would do it again.

Bressman trying to work up the courage to yell at homeless people from his car.

Bressman says the only meme he ever made was about Stephen Paddock, the Las Vegas mass shooter, seen on security cameras carrying two large bags believed to contain the guns he used. The bags are labeled “crime statistics” and “bell curves” in reference to Charles Murray’s book that claimed there is a correlation between race and intelligence. 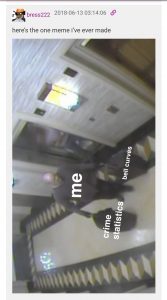 Bressman on Race and Immigration

The Department of Homeland Security released a memo that had striking similarities to a neo-Nazi slogan referred to as the 14 Words. Bressman suggests he would vandalize an immigration law office with this DHS memo. 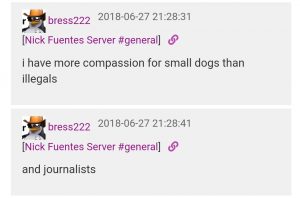 Bressman dropping hard N-bombs with both soft and hard Rs. 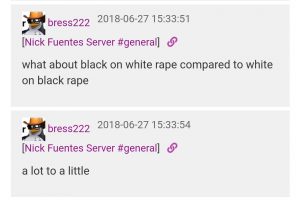 He also parrots old and unproven claims that immigrants and refugees are dirty, they live on welfare, and refuse to learn the culture. 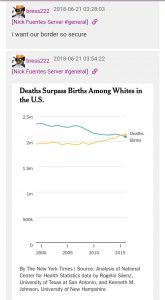 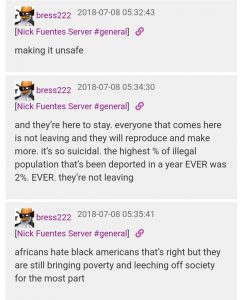 Bressman on current policies and the future political gains of fascism. 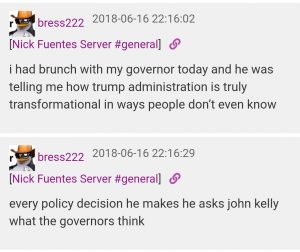 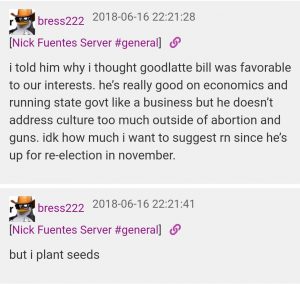 The hardline immigration bill by Bob Goodlatte of Virginia was defeated twice in committee. But it should be disturbing that a governor is having private brunches with 21 year old fascists and is one of 50 governors advising the president on policy. 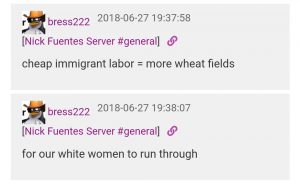 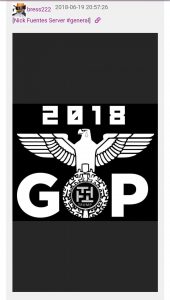