UPDATE: Bryan was fired from his casino job and disowned by his family of school teachers. He currently works at Doozies Homemade Ice Cream and Burgers.

Bryan Curtis, a man of many names; a groomer of many teens. Bryan was a cook employed by Caesars Entertainment, dba Horseshoe Casino, in Council Bluffs, Iowa. Horseshoe has since terminated Bryan. It would seem Bryan has learned how to hedge his bets and spread his wagers. Bryan is SaintMattis on Daily Stormer (whenever the bbs happens to pop up for a few hours before getting deplatformed again and again.) SaintMattis, a meme on General “Mad Dog” Mattis, was Bryan’s Twitter handle until choosing something more vague like @AHeroForUs, then just deleting it all together. His bio read like a malfunctioning AI chatbot: “i just want the Physical removal of all communist. removal from existence in America. i’m a boy, goy. mostly here to h’Win or tell people they’re dumb.”

In Identity Evropa Discord chats he is bdmax and buttdickmaximum.

On The Right Stuff, he is smalltownFASH where he shared his “white pill” story:

I was a drug addicted degenerate 6 years ago. I cleaned up on my own, but finding this movement got me to stop the pot and over drinking, has me working out and reading non stop. I’ve dedicated myself to being able to one day have children. I still have a long way to go, but without ‘this’ I’d still be chasing independent women in bars and acting with no purpose or plan. My people gave me something to live for aside from my family.

Not able to connect to anyone on TRS, Bryan sought out like-minded locals on Daily Stormer in the early Spring of 2017. Emboldened by seeing the khaki-clad street gangs like Identity Evropa and Vanguard America gaining attention, Bryan wanted in. He began hanging flyers for both groups around the metro, and by May he was comfortable posting his personal email address on a public forum. Bcurtis363@gmail.com

By early June he was giving full-throated neo-Nazi support to Attorney General Jeff Sessions. Bryan’s use of GTKRWN is an acronym for “Gas the Kikes; Race War Now” popularized on Iron March, another neo-Nazi forum.

In mid-July, Bryan and his Stormer Book Club were distributing Alt-Right cards at the College World Series, and breaking windows of Black veterans. There’s Bryan in the OOSH Helicopter Rides shirt and the rest of the Stormer Book Club.

By mid-August, Bryan was vetting new recruits in the IRL Book Club and planning meetups. In six months time, Bryan Curtis of Council Bluffs, Iowa was able to make connections with a handful of others that share his racial hatred, anti-Semitism, and claims to white supremacy.

Hate has consequences. If you have a racist friend, now is the time for your friendship to end. Bryan Curtis on Facebook http://www.facebook.com/profile.php?id=100004409087478 (archive http://archive.is/DmGXm)

Nathan Patterson, a 20 year old Management of Information Systems student at University of Nebraska-Omaha, is the type of fascist that can fly under the radar by claiming his interest in National Socialism is purely an aesthetic one. Nate is a hobby vexillologist – a person that studies flags. Nate’s specific interest in flags leans so far to the hard right, he personally identifies himself on Voat as a “National Socialist, Midwest Secessionist, programmer”. His Iron Guard flag is so obscure it probably gets him called a hipster in vexillology circles.  The Iron Guard is the name most commonly given to a far-right movement and political party in Romania from 1927 into the early part of World War II. In 1940, the Iron Guard led an attempted genocide of Jewish Romanians.

Nate Patterson also wants to start a podcast about these topics, specifically on waging a war to secede Nebraska and create a white ethno-state. Any takers? He’s also on Facebook and Twitter as @n8patty

Nathan Patterson’s interest in fascism exceeds way beyond visual appreciation of flags when he’s submitting videos to v/Fascism of speeches by George Lincoln Rockwell, the founder of the American Nazi Party. Another post submitted by Nate titled Fascists_irl shows a soldier with his head in his hands and the caption “When you realize Hitler was right” (archived link http://archive.is/alsDX) and another posted to v/SeriousDiscussion asked “Why is fascism so frowned upon here?” to which he replies:

I want a father figure to show me the ropes and guide me through life. Most people in the world would agree with me, considering about 53% follow some sort of Abrahamic religion.

Nate Patterson, to no surprise,  was active on the Daily Stormer where he shared his love of flags and fascism under the name Fashy_Mav, the Mavericks being UNO’s sports team. With the dissolution of the neo-Nazi forum and all of the cached posts, it is easier for all members to deny any connection, just like Nate thinks he can wrap his racist, anti-Semitic and homophobic desires of genocide in a cool looking flag.

On his personal Github blog and Reddit, Nate goes by the name kypres where he shares more of his flag love. He redesigned the Nebraska state flag and used the same Imgur link each time he boasted his design skills, and it is how we linked his social media to his name by simply Googling the url.

Kale Muffley of Council Bluffs, IA is a classic racist. His style of ideology is Common White Boy racism –  a generational racist worldview – and isn’t easily marketed as Alt-Right because it isn’t a new sort of racist brand. Kale isn’t dapper and he doesn’t fit in with the collegiate and upper class ranks of the Chad Nationalists in their polo shirts and khakis, marching with their Tiki torches.

No, Kale is that old stereotype of racism: the angry working class with a trade. Kale Muffley has worked as traveling glazier installing massive beachfront windows in homes he’ll never afford, but is convinced he might some day. It’s good money when you can find it, or in Kale’s warped vision: If the Jewish Conspiracy wouldn’t keep him down.

Before the Daily Stormer was run off the internet, Kale Muffley was also known as Fashygoydon. The Daily Stormer Book Club had a fashy little meet up the night before car windows were smashed at the College World Series and Alt-Right cards were left on the door. Kale was helpful enough to not cover his sweet Taurus tattoo on his left shin. The same Taurus tattoo on his Facebook user picture. (4/16/95 never forget!) Who are these other frogboys, you might be asking yourself? The squatting Moonman is none other than Identity Evropa member and Omaha drummer, Matt “Oktoberfaust” Johnson. The seig heil in the center belongs to Kale’s brother Kevin Muffley, also of Council Bluffs, and verified by his forearm tattoo sleeve. On Facebook, he is Kevin Nuggit Muffley (archive http://archive.is/eQJVi) and it seems fatherhood has taken a toll on Kevin if his 30-40 pounds of dadweight since his 2010 Georgia mugshot is any indication. (archive http://archive.is/Vtnz6)

On Facebook, Kale still prefers to be called by his leafy green Christian name: Kale Muffley (archived view) and on Instagram: https://www.instagram.com/kalemuffley/

William G Rempel, age 50, aka tiptiptopkek, was issued citations on Thursday, August 17, 2017 for putting up white nationalist posters on city property in Hastings Nebraska. The 50 year old man was identified by police in surveillance footage lurking around in the dark near schools, and affixing the posters with what was described as self-adhesive paper.

The background image on the posters feature a large jera rune, a pre-Germanic inscription meaning “year” or “harvest” in the Elder Futhark alphabetic arrangement.

The jera rune design matches the same as found on “alt-right business cards” that were left on cars with broken windows at the College World Series earlier this summer, and were investigated as hate crimes. The same cards have found their way onto college campuses and restaurants in Missouri, Iowa, and Michigan as early as Summer/Autumn 2016.

Rempel has numerous social media accounts including many neo-nazi forums like Stormfront, Daily Stormer, The Purity Spiral, and The Right Stuff. Rempel posts as tiptiptopkek and on Reddit as tiptiptopkek-NE. County records list him at 1607 w 3rd st Hastings, NE 402-834-0071.

Tiptiptopkek on The Purity Spiral

Tiptiptopkek on The Right Stuff 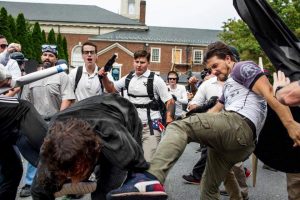 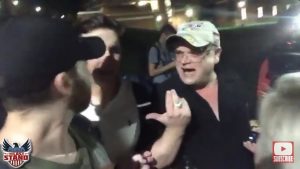 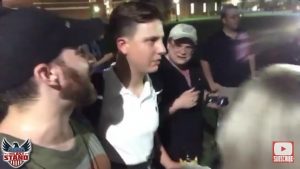 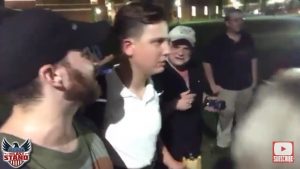 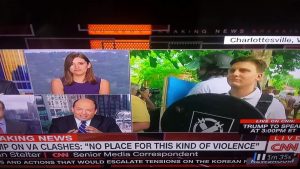